Volunteer Cycling and Running Guide:  Jos sold his IT Company a few years ago and moved from Europe to the most beautiful city in the world: Cape Town. He is particularly passionate about training in the beautiful outdoors of the Western Cape. About three and a half years ago, he decided he wanted to lose weight and started training in earnest. He bought a road bike and has since rarely skipped a cycling day – he has lost more than 50kg and now maintains his weight through consistent training. Two years ago, Jos took a bet to compete in the Ironman South Africa Triathlon, so he added running and swimming to his training and last year he completed his first Ironman. Jos has recently been selected to compete in Half Ironman World Champs. Besides training and the sport of exploring, Jos loves a fine glass of wine and good food with interesting people. He lives in Camps Bay and enjoys an active lifestyle in his paradise!  His favourite run is along the Camps Bay/Seapoint promenade – and he generously donates his fee to the SPCA or THE SPORTS TRUST. We also offer a cycling service guided by Jos – he volunteers his time and bike rental for a minimum donation of R350 to abovementioned charities. 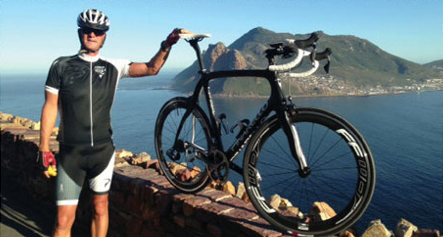